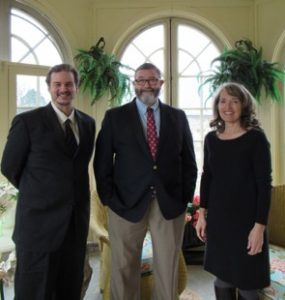 Dr. Nina Mikhalevsky, Provost of the University of Mary Washington, today announced administrative changes affecting the Gari Melchers Home and Studio, the James Monroe Museum, and the Papers of James Monroe.  The two museums and the scholarly publication project are administered by the University.

“To streamline reporting structures and maximize the effectiveness of both museums in delivering their programming, a new organizational structure will go into place in January,” Dr. Mikhalevsky noted in an email to staff.  “I am very pleased to announce that Scott Harris, currently Director of the James Monroe Museum, has been named Executive Director of University Museums.  In his new role, Scott will provide strategic direction and will oversee all aspects of the Gari Melchers Home and Studio and the James Monroe Museum.”

Day-to-day operations at the Gari Melchers Home and Studio will be overseen by Assistant Director/Curator Joanna Catron.  Catron has served as the museum’s interim director since the retirement of David Berreth in July after 26 years as director.  Jarod Kearney, Assistant Director/Curator at the James Monroe Museum, will provide the similar day-to-day management at that site.

Harris will also oversee the on-going work of the Papers of James Monroe, edited by Dr. Daniel Preston.  The Papers project was recently awarded a three-year, $300,000 grant from the National Endowment for the Humanities to produce volumes seven and eight of Monroe’s selected correspondence and public documents covering the period April 1814 to March 1821.

Dr. Mikhalevsky further stated, “This reorganization provides a framework for better coordination between the two museums and will enhance the development of programmatic connections between the museums and other University departments and academic programs. This change also enhances the potential for seeking external grant funding support and will help to strengthen the promotion of the two museums as vital and important members of our academic and cultural programs.”

James Monroe Museum
Founded in 1927 by Monroe descendants on the traditional site of their ancestor’s law office, the James Monroe Museum is the largest collection of artifacts and archives related to James Monroe (1758-1831), the fifth president of the United States.  The museum is a National Historic Landmark and has been administered by the University of Mary Washington since 1964.

Gari Melchers Home and Studio
The 18th-century Belmont estate in Stafford County, Virginia became the home of internationally-acclaimed artist Gari Melchers (1860-1932) and his wife Corinne Mackall Melchers (1880-1955) in 1916.  The property and a collection of some 2,000 works of art by Melchers and other artists was bequeathed to the Commonwealth of Virginia by Corinne Melchers.  Also a National Historic Landmark administered by the University, the Gari Melchers Home and Studio opened to the public in 1975.

Papers of James Monroe
The Papers of James Monroe is a documentary editing project that began at the College of William and Mary and since 1990 has been at the University of Mary Washington.  The goal of the project is to publish a scholarly ten-volume collection of selected letters and papers documenting the life and career of the fifth president of the United States.  Volume Six, covering the period April 1811 to March 1814, was published earlier this year.