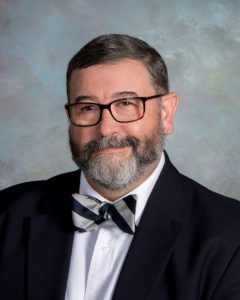 A lifelong Virginian, I have had the pleasure to work as a museum professional in my native state for 30 years.  I began as an historical interpreter at the Colonial Williamsburg Foundation while earning my master’s degree in history and museum administration from the College of William and Mary.  Subsequently I was curator and later director of the Manassas Museum System; director of the New Market Battlefield State Historical Park; and, since 2011, director of the James Monroe Museum, which is administered by the University of Mary Washington (from which I received my BA in history and historic preservation in 1983).  My expertise is in administration of historical museums, and interpretation of American history with particular emphasis on the 19th century.  I am or have been a lecturer in history and museum studies at the collegiate level; a peer reviewer for the Assessment and Accreditation programs of the American Alliance of Museums; a grant reviewer for the Institute of Museum and Library Services; and a team member in development of the American Association for State and Local History’s StEPS self-study program.  I serve on the AAMG board as regional representative for the Southeast Region.  My involvement with AAMG began with participation in the 2014 Summer Leadership Institute, from which I gained a greater appreciation for the challenges and opportunities of working within the higher education environment.