The Association of Academic Museums and Galleries is deeply disappointed in the recent ruling by the Tennessee Appeals Court, of November 29, 2011, that allows Fisk University to sell fifty percent of its Stieglitz collection to the Crystal Bridges Museum to raise funds for the university’s operating budget. We believe that this action irrevocably damages the public’s trust in the university and its art galleries.

According to the best standards of the museum profession, as delineated by the American Association of Museums, works from a museum’s permanent collection may be deaccessioned following a thoughtful, written procedure, but all funds from the sale of deaccessioned work may only be used to acquire new works or for direct care (including conserving other works in the collection). Such funds may not be used neither to support the museum’s general operations, nor may they be used to fund the operations of a parent institution. Museum supporters, including donors of works of art, are unlikely to continue their support of a museum that has no control over its professional practices.

Further, such disposal of work undermines the mission of the academic museum, whose collections directly support pedagogical programs and the appreciation of art for the general public.

The AAMG, which has more than 400 members across the country, joins the Association of Art Museum Directors (AAMD) in its statement of December 8, 2011, in condemning the ruling and proposed partial sale of the Stieglitz collection. The proposed use of the deaccession funds stands in opposition to the ethical and professional standards established by the museum field and threatens the integrity of all university collections. 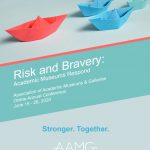