Facing the Inferno The Wildfire Photography of Kari Greer

THE PRICHARD ART GALLERY presents the first thorough exhibition of Kari Greer’s photographs. Greer’s images usually serve as supplements to words and reports; this project provides the space for their full appreciation. Due to increased wildfire activity our summer skies progress from azure blue through hazy tones, achieving a true sense of brown. In 2015,

10.1 million acres burned in the U.S. The increasing length and severity of fire seasons makes this project timely and important. Scientists comprehend what it means to live in a fire environment, including when to suppress, contain or let fires burn. The goal of this project is to help propel greater public conversation and understanding of this volatile dynamic. 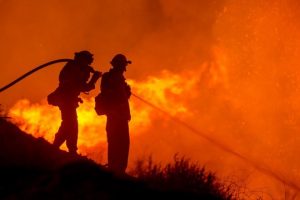 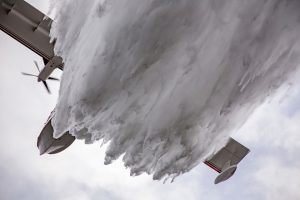 KARI GREER is a photographer with the National Interagency Fire Center based in Boise, Idaho. Kari specializes in wildland fire photography and editorial photojournalism. Her interest in wildland fire photography was sparked during her college years, working on a Forest Service fire crew on the Gifford-Pinchot National Forest in Washington. Her work has appeared in numerous publications including Outside Magazine, National Geographic Adventure, Wildland Firefighter and The New York Times. She has an online video interview in Yahoo Studios for The Weekly Flickr as well as on CNN. Kari studied photography at California State University, Sacramento and spent time in a workshop with Mary Ellen Mark, collaborating with Icelandic photographer Erla Stefánsdóttir and National Geographic photographer Brooks Walker.

Essayist STEPHEN PYNE is a Regents professor at Arizona State University and the author of 30 books, 21 of them dealing with fire. He’s twice held NEH fellowships, twice been a fellow to the National Humanities Center, has received a MacArthur Fellowship, and been awarded the Los Angeles Times’ Robert Kirsch award for body-of-work contribution to American letters. Exhibit text panels are excerpted from Stephen Pyne’s catalog essay.

Project consultant PENNY MORGAN is a professor in the Department of Forest, Rangeland, and Fire Sciences at the University of Idaho. Recently recognized with a Lifetime Achievement Award by the national Association for Fire Ecology, she seeks to understand how vegetation responds so quickly to fires.

Project consultant C. ROD BACON first served as a fire lookout in 1969. He has spent 20+ seasons as a lookout in the Northwest. He has a long interest in photography. He’s taken workshops with master photographers Al Weber, Gordon Hutchings, Bruce Barnbaum, John Sexton, and Anne Larson. 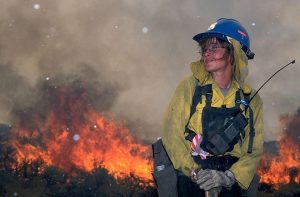 Wildfires are directly affecting more and more of the population. Smoke from these fires have national impact, with the effects of global warming increasing all of this even more. Nationally, the fire season now extends almost year-round. This exhibit has been curated to grab audience attention immediately, then hold it through the power of the images and the importance of the accompanying information. Facing the inferno is the ideal bridge for conversations between the arts & humanities and the sciences. 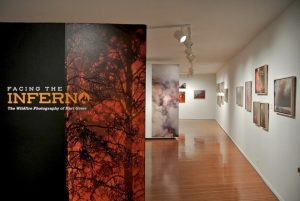