MICHELE OKA DONER: INTO THE MYSTERIUM 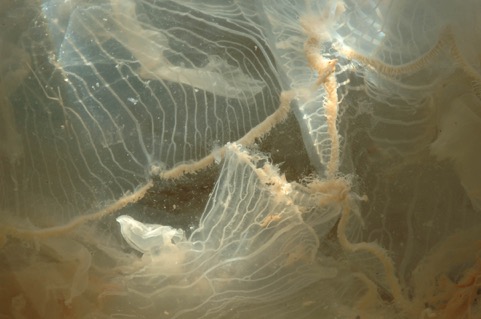 The submerged aquatic world contains primal essence, a fragrance. It perfumes our lives.

BACKGROUND. Fascinated with order, Michele Oka Doner is captivated by humanity’s desire to collect and arrange as well as by our compulsive need to create taxonomies and impose names, thereby bringing regimentation and predictability to an otherwise messy world. The artist is equally enthralled by nature, a palimpsest on which all creatures’ passage through the mortal realm is written. For Oka Doner, even the simple act of taking a walk represents a remarkable opportunity to immerse oneself in the spirit of place and to allow time to collapse in on itself. She sees in twigs, stones, pebbles, leaves, sticks, seeds, pods, shells, and husks vestigial remnants of a world that is both eternal and fleeting: they are Disjecta Membra, or scattered fragments that can be knit back together into new stories by those who are truly in touch with the rhythms of Mother Nature and Mankind’s majestic legacy. Oka Doner is precisely that person. With her Midas touch, the artist transforms what others might call detritus—but what she would label “Mother Nature’s marginalia”—into works that are notable both for their material beauty as well as their intellectual impact. They equally speak to her deep interest in civilization’s push-pull relationship with nature (which ultimately bows before no one) as well as the paper-thin membrane separating order from chaos.

Understanding Oka Doner’s intellectual and aesthetic priorities provides an invaluable lens through which to view Into the Mysterium. Born of an ostensibly straight-forward fact-checking visit to the Marine Invertebrate Museum (University of Miami, Rosenstiel School of Marine and Atmospheric Science [RSMAS]) in 2004, this compelling project is the fruit of the artist’s enchantment with the hidden museum and its 93,000 specimen jars. For when Oka Doner fatefully crossed the Museum’s threshold more than a decade ago, she was inspired to capture what she saw: whispers of ancient time embodied in creatures whose subtle beauty was other-worldly. That they were already neatly systematized and categorized (the Museum’s specimens comprise twenty-three separate phyla) only added to their allure. And thus, Oka Doner entered the Mysterium, taking us back to our aquatic roots and inviting us “into a oneness of being.”

Represented by Marlborough Gallery, Oka Doner’s work is held in many notable public collections including the Art Institute of Chicago, the Metropolitan Museum of Art, le Musée des Arts Décoratifs (the Louvre), the Princeton University Art Museum, the University of Michigan Museum of Art, the Victoria and Albert Museum, the Whitney Museum of American Art, and the Yale University Art Gallery. Among the many awards she has received are the Award of Excellence, UN Society of Writers and Artists; Pratt Legends; Artist in Residence, American Academy in Rome; New York State Council of the Arts Grant; and an Honorary Doctor of Fine Arts degree from The University of Michigan. Publications by Oka Doner, or about her work, include Michele Oka Doner: Natural Seduction (Hudson Hills Press, 2003); Workbook (Oka Press, 2004); Human Nature (Charta, 2008); and Miami Beach: Blueprint of an Eden, with Mitchell Wolfson Jr. (Feierabend 2005, Collins Editions 2007). Everything is Alive will be published by ReganArts in 2017.