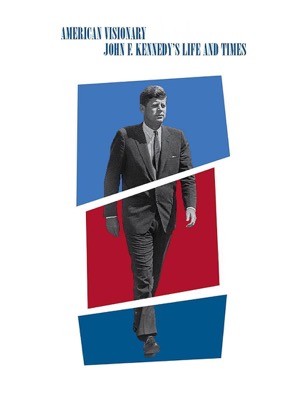 In association with the John F. Kennedy Presidential Library Foundation, WS Productions has organized an important photographic exhibition to celebrate the 100th birthday of John Fitzgerald Kennedy, the 35th President of the United States. The 77 works, some classic and some rarely seen, have been culled from the collections of the John F. Kennedy Presidential Library, from photographic archives including LIFE, Magnum and Paris Match and from the Getty images collection of over 36,000 images; the photographs are joined by a selection of ephemera.

Prior to television becoming the dominant medium, photojournalists set the gold standard around the world and the vibrant period of the 1950s and early 1960s produced some of the finest and most vivid documentary photography of the era.

No single politician was photographed more than JFK – from his congressional bid as a decorated war hero in 1948, to his fairy-tale marriage to Jacqueline Bouvier in 1953, his run for the White House and Presidency in 1960, his achievements as Commander-in-Chief, his commitment to the arts, his travels around the world, and the final tragedy in Dallas.

AMERICAN VISIONARY: John F. Kennedy’s Life and Times is the most exhaustively researched group of Kennedy photos ever assembled. The exhibition celebrates the life, political career and extraordinary vision of one of the country’s most admired and charismatic presidents.

The exhibition is based on the book JFK: A Vision for America, edited by JFK’s nephew Stephen Kennedy Smith and historian Douglas Brinkley. The book offers an extraordinary commemorative history with hundreds of wonderful photographs highlighting JFK’s life, family and important role in shaping the twentieth century. The exhibition and book provide an ideal platform for events, public discussion and educational programming about the presidency and JFK’s lasting impact.

Content: 77 framed photographs in black and white and color plus ephemera. A 3 panel introductory graphic of JFK walking at his full height, 6’2” is also included.along with captions, a timeline of JFK’s life and text panels as well as hi—res images for press purposes

Size: The exhibition requires 200 running feet for images plus captions and text panels. Every photograph is framed 17 x 21” with D rings on the back for hanging.

Fee: $7500 for an eight-week exhibition period with some flexibility plus prorated round trip transportation.

Further travel is available from November 2017 through 2019.

Publication: A Vision for America: JFK edited by Stephen Kennedy Smith and Douglas Brinkley is published by Harper Collins and is available for discounted bulk purchase for your shop.