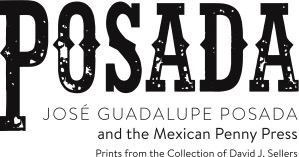 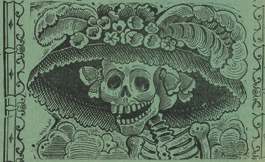 José Guadalupe Posada (1852–1913) was one of Mexico’s most influential printmakers and illustrators. He produced an extensive body of imagery, from illustrations for children’s games to sensationalistic news stories that appeared in a variety of inexpensive penny press publications marketed to the country’s growing middle- and working-class. Posada is best known, however, for his popular and satirical representations of calaveras (skeletons) in lively guises. These figures were featured prominently on broadsides—cheap illustrated handbills—that were published for the annual Day of the Dead celebrations. Posada’s prints shaped generations of Mexican artists, among them the muralists Diego Rivera and José Clemente Orozco.

Posada was born in the city of Aguascalientes, where his father worked as a baker. After a childhood that exposed him to a number of different crafts and trades, he showed promise in the arts. In 1870 Posada found work in the studio of José Trinidad Pedroza, where he learned lithography, engraving, and related printing techniques and produced a wide range of illustrated publications. Two years later, Posada and Pedroza relocated the business to León de la Aldamas, Guanajuato. Over the next fifteen years, Posada’s career developed, and he became known for his skill as an illustrator. In 1888 León was destroyed by a flood, and Posada soon moved his enterprise to Mexico City.

Posada arrived in the capital during the transformative, modernizing age of Porfirio Díaz’s lengthy presidency. Transportation, industry, income, and literacy rates improved markedly, which was beneficial to the publishers and printers. Posada worked briefly for Ireneo Paz (grandfather of Octavio Paz) and a number of other publishers before he earned a position at the workshop and publishing house of Antonio Vanegas Arroyo, where he would create much of his career-defining imagery. Here he likely met the illustrator Manuel Manilla (1830–1895?), who was also employed by Vanegas Arroyo. Posada adapted Manilla’s early calavera imagery and developed it significantly over the course of his mature work. On occasion, Vanegas Arroyo published their respective calaveras on the same broadside. Not surprisingly, their overlapping careers and similar imagery have led to confusion among scholars regarding the authorship of many of the prints published by Vanegas Arroyo at this time. 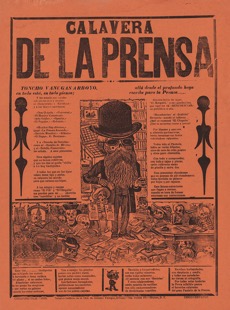 Trained in lithography, intaglio, and relief printing, Posada had remarkable facility as a printmaker and as an illustrator. Although well versed in the elegant European style of lithographic printmaking, Posada was perhaps most daring when he worked aggressively and coarsely with burin and acid.

He combined these opposing printmaking skills to create imagery that was rooted in quality draftsmanship and expressed through a forceful, bold technique.

Posada spent the rest of his life working in Mexico City, producing a vast array of images for Vanegas Arroyo and other publishers and gaining a well-earned reputation for his inventive and striking designs. Although Posada’s total graphic output is difficult to measure precisely, his works likely number in the several thousands.

Posada died in 1913 and was buried in a pauper’s grave. Although he was little remembered in the years immediately following his death, Posada’s importance in the history of graphic arts in Mexico was recognized in the 1920’s by artist and writer Jean Charlot, who championed him and played a key role in preserving, collecting, and publishing much of the artist’s work.

This exhibition features a wide range of prints and print media by Posada, Manilla, and their compatriots, including calaveras, chapbooks, political prints, devotional images, and representations of natural disasters and popular events.

Diane Miliotes, guest curator of the exhibition and catalogue author is a specialist of Latin American Art and late nineteenth- and early twentieth-century popular penny print culture in Mexico. Her publications include José Guadalupe Posada and the Mexican Broadside (2006), José Clemente Orozco in the United States, 1927–1934 (2002), and What May Come: The Taller de Grafica Popular and the Mexican Political Print (2014). Miliotes is Interim Curator of Modern Art and Design at the Smart Museum of Art, The University of Chicago.

INSURANCE
Exhibitor to provide Certificate of Insurance for “wall-to-wall” coverage
$100,000