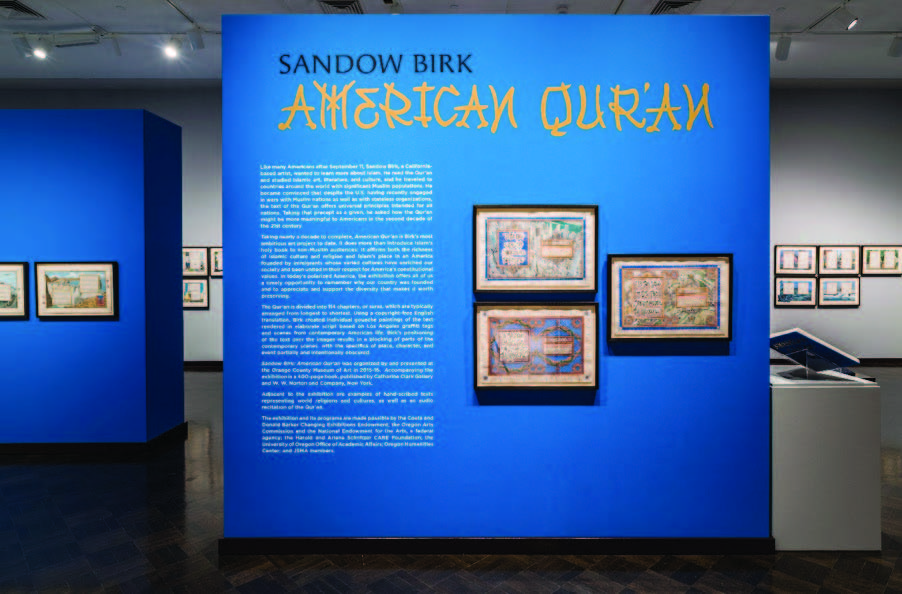 For the past twenty years, Southern California painter Sandow Birk (b. 1962) has focused on applying the vision and scope of history painting to examining issues of contemporary relevance. Taking over a decade to complete, American Qur’an is Birk’s most ambitious project to date. Every verse of the holy book of Islam is hand-‐transcribed and illustrated, using the calligraphy of the individual verses to frame scenes of contemporary American life.

Inspired by travel in the Islamic regions of the world and informed by extensive research in collections of Islamic art and manuscripts, Birk’s undertaking emerges from a conviction that despite the U.S. having recently engaged in wars with Muslim nations as well as stateless organizations, the text of the Qur’an offers universal principles intended for all nations. American Qur’an explores how this religious text might have meaning for Americans in the second decade of the 21st century.

The Qur’an is divided into 114 chapters, or suras, which are typically arranged from longest to shortest. Using a copyright-‐free English translation, Birk created individual gouache paintings of the text rendered in elaborate script based on Los Angeles graffiti tags depicting scenes from contemporary American life. Birk’s positioning of the text over the images results in a blocking of parts of the contemporary scenes, with the specifics of place, character, and event partially and intentionally obscured.

Birk completed American Qur’an in the summer of 2014, and it premiered soon after at the Orange County Museum of Art in winter 2015. The exhibition features approximately 200 gouache paintings, two large-scale acrylic paintings, and several ceramic works. The exhibition coincided with the 2015 release of a fully-illustrated 400 -page catalog, published by Catharine Clark Gallery and WW Norton and Company, New York, with essays by Zareena Grewal, Iftikhar Dadi, and Reza Aslan.

Sandow Birk: American Qur’an was organized by the Orange County Museum of Art and presented at the Jordan Schnitzer Museum of Art January 21 – March 19, 2017.