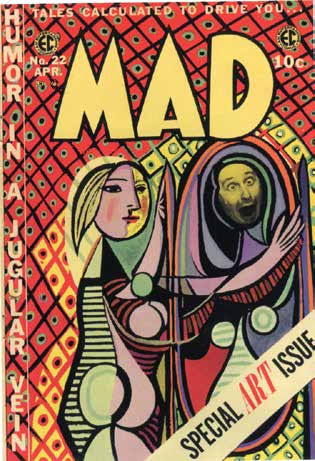 The Jordan Schnitzer Museum of Art at the University of Oregon invites your museum to participate as one of three venues for the special exhibition Aliens, Monsters, and Madmen: The Art of EC Comics, we are looking for an institution to open the show, mid-January through April 13, 2016 after which the JSMA will conclude the tour.

Aliens, Monsters, and Madmen: The Art of EC Comics celebrates the achievements of the most artistically and politically adventurous American comic-book company of the twentieth century: Bill Gaines’s Entertainment Comics, better known to fans all over the world as EC. Specializing in comic-book versions of popular genre fictions— particularly Crime, Horror, War, and Science Fiction—the company did far more than merely adapt the conventions of those genres to the comics medium. In the case of the now legendary Science Fiction and Horror titles, Weird Science and Tales from the Crypt, the creators at EC actively extended those genre conventions, while simultaneously shaping the imaginations of a subsequent generation of writers and filmmakers, such as Stephen King, George Lucas, John Landis, George Romero, and Stephen Spielberg. EC also broke new ground in the realm of satire as the publisher of MAD, an experimental humor comic that parodied the very stories that were elsewhere its stock in trade. MAD became a magazine in the mid-1950s and is still in print.

Our exhibition will tell the story of the rise and fall of the EC publishing company from its foundation in 1944 through to its demise in 1956. We will chart the efforts of publisher Bill Gaines to find a niche in the competitive world of comics publishing during the 1940s, when titles sold in the millions. After a number of failed experiments in the Romance, Western, and Superhero genres, Gaines struck gold with his Crime and Horror books, which he swiftly followed with a series of Science Fiction and War titles featuring stories of unusual sophistication. These comics were generally more daring, both politically and artistically, than other forms of popular media of the period, including most movies. In the guise of genre fiction, EC explored serious “real world” issues, such as racism, lynching, jingoism, drug addiction, and corruption within the legal system, in tales illustrated by some of the best creators in the field.

Perhaps unsurprisingly, EC also became the focus of controversy and the target of a national “anti-comics” movement. Gaines himself was subjected to hostile questioning before a Senate subcommittee on the supposed negative social impact of comics; and by 1956, his company had been driven out of business by the forces of reaction—with the single exception of MAD, which became a magazine to avoid the censor. Our exhibition will demonstrate that, in the face of moralized hysteria and political demagoguery, EC comics represent one of the first great flowerings of American comic-book art.

Drawn from the largest private collections in the county, the exhibition features roughly 130 original pages by some of the most highly regarded American comic-book artists of the last century, including Johnny Craig, Reed Crandall, Jack Davis, Will Elder, Al Feldstein, Frank Frazetta, Graham Ingels, Bernie Krigstein, Harvey Kurtzman, Joe Orlando, Al Williamson, and Wally Wood. The show is organized chronologically and by genre, beginning with a few examples drawn from EC’s early experiments with Romance, Western, and Superhero titles, before devoting the lion’s share of the exhibition to covers and interior pages from EC’s peak-period Crime, Horror, War, and Science Fiction comics—as well as a section showcasing the same artists’ satirical work from the pages of MAD. We also examine Gaines’s various late efforts to reach a more adult audience with the illustrated magazine format, as well as his attempt to create less provocative but still aesthetically accomplished “adventure” comics.

Finally, because the best work at EC was a seamless blend of verbal and visual storytelling—the very essence of great comic art—we will display several famous stories in their entirety: these complete stories will include Johnny Craig’s “Touch and Go,” Jack Davis’s “Foul Play,” Harvey Kurtzman’s “Corpse on The Imjin,” and Wally Wood’s “Three Dimensions.” Visitors to the show will, therefore, have an opportunity previously enjoyed by only a privileged handful of individuals: to read a classic EC tale from beginning to end, from the original production art, thereby enjoying all the details of rendering that were inevitably lost in the comic-book printing process.

Aliens, Monsters, and Madmen: The Art of EC Comics will be accompanied by a major publication, produced by IDW press. In addition to more than fifty images, the book will include essays by guest curator Ben Saunders, novelist Glen David Gold, comics scholar Charles Hatfield, and comics editor Diana Schutz. It is intended to be the best researched and most comprehensive exhibition and book to date on EC.

Guest curator Ben Saunders is a professor in the Department of English at the University of Oregon, where he specializes in the poetry and drama of the English Renaissance. He recently initiated a Comics Studies minor at the university and was the guest curator of the JSMA’s special exhibition Faster Than a Speeding Bullet: The Art of the Superhero.

The JSMA is offering the exhibition to three venues. We anticipate that it will fill our 4000 sf special exhibitions gallery (but could be in a smaller space with temporary walls) and will be made available for a rental fee of $12,000 plus one-way shipping.