By now many of you are aware of the latest development with Randolph College’s sale of its George Bellows painting Men of the Docks to the National Gallery in London (see http://www.nytimes.com/2014/02/07/arts/design/a-bellows-painting-moves-from-virginia-to-london.html). Although much has changed in the cultural, political, and economic landscape in the last six and a half years, since the four paintings were initially removed from the Maier Museum of Art, one thing hasn’t changed: the actions of Randolph College in regards to its selling of irreplaceable works of art goes against the fundamental ethics and best practices of the museum field as laid out and agreed upon by all major museum organizations, including the Association of Academic Museums and Galleries. It shows an appalling continuation of an institution of higher education denigrating the academic integrity of its museum by using the art collection as a commodity. We remain united in our resolve to see the leadership of Randolph College wake up to the seriousness of the breach of public trust that their actions have created. We first deplored and condemned this action in our October 9, 2007, statement, which appears below.

The students who raised the funds for the purchase of Men of the Docks in 1920 recognized the significance of a world-class art collection to a liberal arts education at Randolph-Macon Woman’s College. While the establishment of a partnership with the National Gallery in London is in many ways commendable, it remains that the educational impact of art in museums and galleries on campus has been compromised–to the disservice of Randolph College’s students today and in the future. We stand by our condemnation of these actions and the passage of time will not waiver our collective resolve to uphold the vital importance of the collections of college and university museums and galleries as integral to academe.

Randolph College, in its media release announcing the sale of Men of the Docks,states that the funds from the sale will be used to bolster its endowment. Omitted from the College’s statement is the Maier Museum of Art, where the painting was exhibited for more than 80 years. We urge the leadership of Randolph College to recognize the academic value of great art in great museums at great colleges and universities and to realize the seriousness of the breach of public trust that their actions have created.

Jill Hartz, President, AAMG, on behalf of the AAMG board and its members 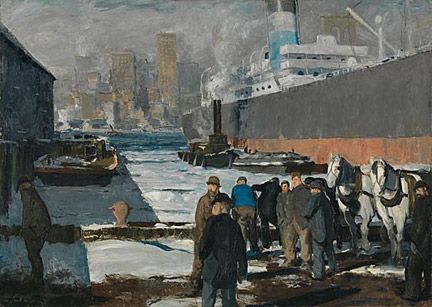 National Gallery (London)
“Men of the Docks,” by George Bellows