I am writing to you in my capacity as a university museum director of thirty-years and as president of the Association of Academic Museums and Galleries https://www.aamg-us.org/ . Ours is the principal organization of university and college museums of art, cultural heritage, natural history, anthropology, history and science in the United States.

We have noted in the press that Representative Raecker is considering proposing a bill before the Iowa General Assembly that would result in the removal and sale of the painting “Mural” by Jackson Pollock from the collection of the University of Iowa Museum of Art. As an association, we and other art and museum associations have addressed a similar move on two previous occasions–following the flood and at the beginning of the nation’s economic downturn. (On both occasions, we expressed our concerns and were pleased to see the University of Iowa President Sally Mason and others move to maintain the painting’s status as one of the most important works of art belonging to Iowa.) From our professional standpoint, such a move remains counter to our ethical and professional standards in regards to donor wishes and relations in the giving of art to museums. It could also place the University of Iowa Museum in jeopardy of losing its accreditation by the American Association of Museums, the ramifications of which could possibly affect future art and exhibition loans to the Museum and also its fundraising capacity and art donor relationships.

We do appreciate, as we understand it, the desire to convert the proceeds to scholarships. Fundraising for such needs are always a priority and a challenge. We are nonetheless against the removal and sale of “Mural”, even for this reason. While spending his adult life as a painter in New York and environs, Jackson Pollock was a native Westerner and his spirit of independence and individual expression helped create the first uniquely American art movement – Abstract Expressionism. His mentor and teacher was the Missourian Thomas Hart Benton (whose capital murals were my first exposure to the arts as a boy growing up in Jefferson City): Pollock’s art belongs to that same fluid expression of American freedom and individuality. “Mural” is among the finest examples of this. Having it in the heart of the country and belonging to state whose influence on American history and politics is profound, is just right, in our minds. Its availability to the state’s and region’s future leaders has a qualitative value worth preserving.

The painting has suffered greatly from its recent moves. I know from colleagues who have been involved in moving the painting in the recent past that it is fragile and loses paint with each jostling. I fear the idea of having the painting return periodically to the University would put this important cultural artifact in further danger. As our prime directive as museum professionals is to first and foremost preserve the cultural materials in our care for the public–present and future–we bring this to your attention as an important consideration.

We urge the University of Iowa Board of Regents to take action to allow the University and Museum to continue to work toward the collection’s restoration on campus and advance its important cultural and educational roles there and with its most renowned work of art on the wall and available for study, enjoyment and inspiration for present and future generations. 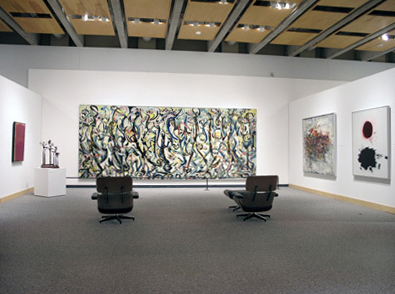