Atomic Alert!: Confronting “The Bomb” in the New Atomic Age & A History of Walls: The Borders We Build

Two Exhibits – Scroll down for the second listing. 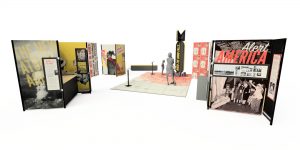 Atomic Alert!: Confronting “The Bomb” in the New Atomic Age

The Soviet Union’s detonation of its first atomic bomb on August 29, 1949, thrust the United States into a new and more precarious era. Just four years after celebrating victory in World War II as the only nation with an atomic bomb, Americans now found themselves confronting the probability of an atomic war.

Over the next decade, the government, through the newly formed Federal Civil Defense Administration, issued posters, pamphlets, and related materials; offered training courses; sponsored civil defense conferences; and worked in cooperation with state and local civil defense entities as well as the private sector to prepare men, women, and children for the day “the bomb” might fall.

Atomic Alert!: Confronting “The Bomb” in the New Atomic Age explores the government’s efforts to educate Americans about what to do before an atomic attack; how to react to a sudden, blinding flash; and what action to take in the aftermath of an atomic blast.

Visitors to Atomic Alert! will:

Featuring artifacts and interpretation from Michael Scheibach, Ph.D., independent scholar and author, Atomic Alert! offers a unique opportunity to revisit the early atomic age when the world was divided between two atomic-armed adversaries: the United States and the Soviet Union.

Atomic Alert! features a large interactive called “When the Bomb Falls,” which allows visitors to explore the impact of a nuclear blast on a geographic area. From the innermost circle, where survival is near impossible, to the outer edges of the blast radius, where the immediate impact is less severe but the threat of radiation from fallout remains. Featuring a large sculptural a-bomb, “When the Bomb Falls” draws visitors closer, all while exploring the dangers of proximity to an atomic explosion.

With no packing crates to store, exhibits designed by Overland honor your institution’s time and space concerns. The exhibit is ideal for spaces around 1000 square feet.

For more information on the exhibit content to begin booking, visit overlandexhibits.com/exhibits/atomic-alert/.

A History of Walls: The Borders We Build

The walls of the world—the big ones, the ones with geopolitical ramifications—are fraught things. They are simultaneously expressions of power and fear. To those who live near them, the wall can appear as a reminder of safety or oppression, blank canvases or threatening parapets. To those that aim to cross them, the wall is an obstacle, often life-threatening, certainly life-changing, especially if you manage to get across.

The exhibit A History of Walls: The Borders We Build explores four significant historic walls built by nation-states. From the Israel/West Bank Barrier to the Great Wall of China, from the Berlin Wall to the wall along the US-Mexico border, A History of Walls explores the history of and meaning behind these imposing infrastructural elements.

Presented in both English and Spanish, A History of Walls explores these questions:

The exhibit’s tone and outlook is nonpartisan and calm. It examines the lives of the people most deeply affected by the presence of walls in this world: the dispossessed and oppressed, the ones who, for reasons largely beyond their control, risk crossing these manmade, highly militarized zones. We attempt to illustrate what the stakes are for them, as well as for those who would build a wall, and build it now.

A History of Walls is designed to be both inclusive and engaging, and includes a central interpretive section featuring Josh Begley’s video “Best of Luck With the Wall,” as well as interactive element that asks visitors to consider the walls in their lives.

With no packing crates to store, exhibits designed by Overland honor your institution’s time and space concerns. The exhibit is ideal for spaces around 1000 square feet.

For more information on the exhibit content to begin booking, visit overlandexhibits.com/walls.